Our most recent book, The Griots of Oakland: Voices from the African American Oral History Project, is making its way into the national consciousness. Just in time! Here’s a reference to our book made in a great article by Wyatt Closs in the Huffington Post:

There’s a recently published book called The Griots of Oakland, by Story for All, Healthy Schools and Communities, and African American Oral History Project in conjunction with the Oakland Unified School District. It is page after page of observations and reflections by young black men in Oakland, some too young to know first-hand about Oscar Grant. It’s a beautiful and poignant portrayal of raw emotion and identity.

In one section, the young men are asked “If you could change one thing about yourself, what would it be?’ One young man answered “Not to get angry at people, if it was like, a mistake…”

Wyatt truly understands the power of this book and why it was created: to provide a counter narrative to the story too often being told about African American men. As Howard Gardner from Harvard said: Stories are the single most powerful weapon in a leader’s arsenal. We hope this book inspires other leaders of all ages to speak up and be heard for who they really are. 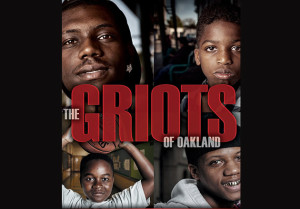