Oct 07 Angela Zusman Comments Off on Storytelling in Action! Permalink

For the last few years, Story For All has directed a storytelling initiative in Oakland, listening to Opportunity Youth and their adult allies recount their experiences and support for the Reconnecting Youth Campaign (RYC). As we created the space for stories to be shared, a predictable magic happened: the storytellers become motivated to take further action. One young woman had agreed to share her story because she had a sense that her story could be helpful to others. Once she experienced this to be true, she became inspired to share her story more broadly, improve her communication skills, and learn more about advocacy. She was already woke – this was a different awakening, an awakening to her own immense power and sense of community. This is the predictable magic that never ceases to amaze me: when young people feel heard, they are motivated to take action on behalf of themselves and others. Those who hear the stories are also motivated. We set up a meeting with our member of Congress and prepared to take the stories to the next level.

A coalition grew from these stories: advocacy experts who could guide our preparation and provide the data and materials that back up the campaign; communications experts who could spread the work and inspire further action around the nation; organizational leaders who could speak to the local need and impact; and youth advocates, our inspiration: perfect representations of why we do this work every day, and why this campaign matters.

On the day of our meeting, we assembled at Civicorps in Oakland for advocacy training. Our team included five young people, all former Opportunity Youth who were in different phases of building their lives and careers but united in their desire to use their voices for the betterment of their peers and the organizations that had supported them. Some of us were meeting each other for the first time that morning. There was some nervousness – especially for those who had never met with an elected official before – mixed with a solid sense of purpose. We were doing this, even if we didn’t quite know what “this” was.

The advocacy training was an excellent way to start the day. We had a chance to get to know each other a touch, we reviewed the basics about what elected officials need to hear and how best to convey it, and we planned for the meeting itself – who would say what, what stories to share. Then we piled into a van and made our way downtown. 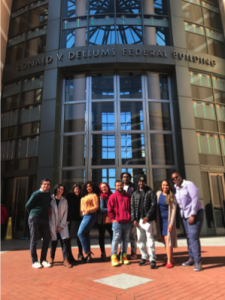 There was a growing feeling of joy and camaraderie as we wove our way through the potholes and construction zones of Oakland, and then through the elaborate security checkpoints in the federal building. Nervousness transmuted into excitement as our elevator ascended and we finally arrived at a door with the plaque reading “Representative Barbara Lee.” Once inside, we were ushered into a large, beautiful office filled with photos and awards, an inspiring place for all of us, especially the young women of color who could see themselves in our champion, Barbara Lee. The young people took their seats at the table. We adults sat to the side. Introductions were made, and as we had prepared, the young leaders presented their points, their good will, and their stories.

As I watched and listened, three words kept popping into my mind: Loyalty, connection and empowerment. These words are common enough, but today I was seeing them in action.

Loyalty shone through as passion, as homage to the organizations that had helped bring each of these young leaders to this office from the streets, from the system, from a series of broken homes. This wasn’t a “kiss the ring” type of loyalty – it wasn’t a loyalty born of fear. Rather, this is what it looks like when young people feel a sense of commitment and responsibility to help others the way they have been helped; to give back and help strengthen the organizations that gave them belief in themselves. We call it “paying it forward,” and on my optimistic days, I call it humanity.

Closely related to this sense of loyalty was a feeling of connection that expanded beyond the shared experiences of the young people in the room. Advocacy demands partnership, and each of us was willing to step back to let the next person step up and say their piece. There was immense joy in being part of something greater than ourselves. There was a place for everyone, everyone offered something unique and important, creating a bond that felt as powerful and palpable as the stories and data we shared.

For most of the young leaders, this was the first time they had ever met with an elected official. One of our team members related how he had been walking past this federal building almost every day of his life but never imagined entering its doors, let alone to represent his own community. Our preparation had ensured that each person had a role to play, and everyone gravitated towards something that allowed their personality and experience to shine forth. In his soft-spoken manner, one young leader with an interest in research expertly conveyed the facts behind the campaign. Another young leader, a very strong and confident communicator, helped to drive home key messages both through her personal story and the talking points we had outlined ahead of time. Another young man contributed a powerful presence even without speaking, and was the first to step up to answer questions posed by the Congresswoman’s staff. The fourth young leader’s earnest responses brought light, levity and Truth into the room. We adults were able to fill in the gaps and offer context as needed, and the synergy between adults and young people underscored the story we were trying to tell – that we believe in one another, that we need one another, and that we stand together. There was space for everyone to shine in their own unique way. This is empowerment.

I could swear the young people walked out the door a little taller than they had walked in, and there were genuine hugs all around as we parted ways.

This is what happens when you bring hearts and minds together, when you bridge generations, races, and genders and work together as humans for the betterment of all. I too am a better person for this experience; it helped me become more confident in myself and more dedicated to serving young people in my own special way. It brought us more allies at the federal level. And it gave these extraordinary young people a window into their greatness and potential. This is storytelling in action!!