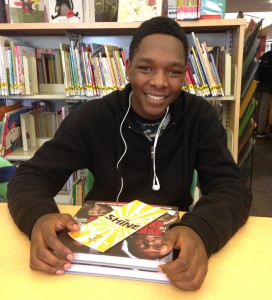 My Story….My name is Ne’Quwan Taylor. I just turned 18 on November 13. I have a total of 6 brothers, 3 are older and 3 are younger, also 4 younger sisters. I am the first of my siblings to graduate from a regular high school. While I was in high school I was a part of several different programs. I was a part of a program called African American Male Achievements (AAMA). In this program we learned about overcoming obstacles, stereotypes and taking care of our responsibilities. While in this program I was introduced to another program, the African American Oral History Project. This project was created to hear the male, youth voices of Oakland. This project took place during my sophomore year in high school. I was the youngest one in the group. I was shy and I didn’t really talk, but as the months grew on so did my spirit.

This project really helped change my life. One night while we were interviewing youth at Parker Elementary, I felt really inspired by them. Some of the youth said that they wanted to see things more positive in their lives. They said they looked forward to the future but living in Oakland makes doing so scary. This really inspired me because I want to show them there is hope to make it in Oakland. I want to give these young kids something or someone to look up to. I have been wanting to become a registered nurse and that’s exactly what I’m going to do. The reason why I want to become a registered nurse is because I want to help people. I want to get more wisdom and knowledge from those who actually want to better another person’s life. I want to be a role model for youth to look up to. I want Oakland youth to know that when things get hard, they have to fight through it to make it. I really hope I can touch and change people’s lives.

Your email address will not be published.