Kathryn Eastburn is a journalist with The Greenwood Commonwealth. This article was originally published on August 28, 2016. See article link here.

Some 300 middle and high school students from across the Delta gathered at Mississippi Valley State University on Saturday for “School House Rights Rock,” an all-day seminar designed to inform them of their civil rights and how to claim those rights with respect and confidence.

The event was sponsored by the Mississippi office of the American Civil Liberties Union (ACLU) with assistance from the Mississippi Center for Justice’s Indianola branch office.
Groups of students from Ruleville, Drew, Moorhead, Greenville and Indianola participated. No delegations from Leflore County or Greenwood Public Schools were present though some individual students and adults representing local schools attended.

The purpose, ACLU Communications Director Zakiya Summers told the group, was to learn the nature and meaning of civil rights within a school setting, and to learn how to exercise those rights effectively.
Summers jump-started the morning’s events by introducing students to the ACLU’s Mobile Justice app for smart phones.

“This allows you to record any interaction you have with law enforcement or another person in authority,” she said. “And if you ever feel your civil rights have been violated, you can fill out an incident report on the app or call us.” Students appeared a little bewildered by the idea early on, but as the day advanced and information sessions progressed, ideas began to take form in words and actions.

Leading a workshop for middle schoolers were members the Theatre of the Oppressed from New York City. The nonprofit company travels around the country engaging students in interactive games that “connect how we understand our rights and how experiences of oppression affect our communities.” 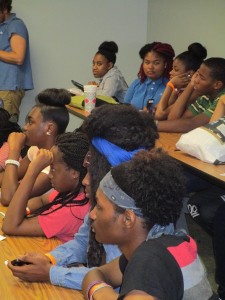 When examples were given and acted out, students were quick to associate what they were seeing in the workshop with what they often see in their daily lives. Recognizing discrimination and responding to it without either shutting down or acting out ineffectively was a topic the students grasped quickly.

High school students enjoyed a session with Peace Poets, also of New York, a group of spoken-word performers who’ve traveled around the world getting out their message of using poetry and music “to examine life and advocate for rights.”

Students learned to prepare personal statements crafted around concepts of content, performance and purpose, understanding that using words in a compelling way draws listeners to the message and enables them to hear.

Adults listened to a discussion of Advocacy Best Practices, including the right to
ask a school to make its policy available when either adult or student actions are
in question. Topics discussed included use of restraint and seclusion in schools,
search and seizure, and procedure for discipline hearings.

One group of teenagers present was the Sunflower County Systems Change
Project (SCSCP), an organization addressing school discipline, juvenile justice
and the prevalent media narrative of young men and boys of color. The
Sunflower County Consolidated School District partners with the ACLU and the
Mississippi Center for Justice in support of the program.

Lopez and Candelaria talked about creating a counter-narrative to the prevailing
narrative depicting young men of color predominantly as thugs and criminals.
“We need to be aware of the criminalization that’s a result of unbalanced
representation in media,” said Candelaria.

Asked where he gets his inspiration, Candelaria said it comes from
understanding links to history and learning the history of struggle and oppression.
“There’s power in knowing about icons who fought and struggled,” he said. “We
can’t forget about the creations African-Americans brought to this country, the
history and rich culture that came with them to North America.”

Lopez said that he has learned through participating in Peace Poets that despite
difficult circumstances, there is opportunity and power within every individual.
“Your pessimism never lets you listen to the God in you,” he said.

Both men are involved in “intensive mentorship,” educating young people “about
how to walk in the world.”

They have written and performed specifically for families of young men who have
died at the lands of law enforcement in recent years, and one of their group has
produced a documentary film, “The Making of an Activist.”

All of these activities, they said, are part of creating a counter-narrative, of telling
the stories that aren’t often told on the nightly news. 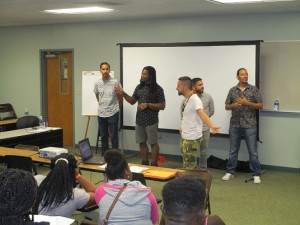 “We’re representing the creation of our own story,” Candelaria said.
That includes interactions of young men of color and police, especially those
incidents that have ended in violence.

Lopez told the story of being pulled over by a policeman in the Bronx.
“He said, ‘I’m going to search you,’ and I said ‘I did not consent to a search,”
Lopez said. “(The policeman) said ‘I don’t give a s*** about your consent’ and I
said, ‘Why are you so hostile?’”

It turned out, Lopez said, that this policeman had just returned from a tour of duty
in Iraq and still felt at war, with the community itself.

Candelaria said he had learned that the problem is far more complex than the
“one bad apple” theory, and that he had discovered there is a systemic problem
with the way we expect police to function in our society, with productivity
measured by the number of tickets an officer hands out rather than what service
they provide.

“Solutions need to be multi-faceted,” Lopez said. “Too often we focus on one
branch and not the whole tree.”

“The key is involvement,” Candelaria said. “Know your rights and engage in
conversations about them, at public forums, at school, and around the dinner
table.”

In the high school workshop, Candelaria, Lopez and three other Peace Poets
encouraged students both to speak with purpose and to listen with equal
intention.

“One thing we do is build a circle,” the Peace Poets said. “We call it a cipher. It’s
a place where everyone’s voice is heard with love and respect.

Most students responded no. The Peace Poets told them they were in a room of
experts on the lives of young people, a room full of professors ready to teach if
they were ready to listen.

“We need to treat each other with that respect. We are all teachers.”