“What they don’t see is how my Grandma picked cotton to provide for our family, [but] what they do see is just another young black male.”

In a circle of his peers and The Peace Poets, Myron, a participant in the “R.O.O.T.S. of Sunflower County” project and teenager in the Mississippi Delta, explained what other people see when they look at him. The poets traveled from Bronx, New York to Indianola, Mississippi with the specific goal of giving young black men the tools to express their stories through poetry. As a result, Myron’s one liner silenced the group. He is an example of how the negative perceptions of young men and boys of color (YMBOC) affect individual children who seek to define themselves by the sacrifices of their elders and not the popular narrative of young black men in America.

The idea that young black men feel misperceived by society is not new. Parallels from the past draws experiences of violence in black communities because of its perceived threat of violence.

In Tulsa, Oklahoma in mid-September 2016, video of a black man with his hands up being shot and killed by police also reveals audio from a helicopter officer filming the incident who says, “He looks like a bad man.” The same biases that breed contempt for a man on the ground hundreds of feet away as one flies in the air matches Myron’s perceptions of feeling reduced to being “just another young black male.” In Charlotte, North Carolina, a man said to be reading in a car was killed by police on the presumption of him being a criminal, proving that a falsified narrative is not an innocent misperception.

This misperception can breed implicit bias, inequality, systemic racism, and even murder. The intersectionality between racism, violence, and injustice is often criminalization, specifically the criminalization of black lives and black communities.

Although he’s not completely aware of it yet, Myron embodies what needs to happen in order to spark narrative change in his community and similar communities across the nation because the danger of criminalization can be lethal and life changing for young men and boys of color in America.

A black person is killed every 28 hours by police. In this digital age, these killings are often associated with a new hashtag for social media in remembrance of the victim, which sometimes leads to a news cycle switching to focus on the latest tragedy, an affected community anguished with grief, and a protest in the streets of a major city turned violent. The victims, young black men perceived as dangerous criminals because of the color of their skin, are more than just hashtags. They represent communities of color struggling to define themselves away from the narrative that dubs them deserving of such violence. Here, the power of narrative change becomes one of the most impactful tools to addressing criminalization. 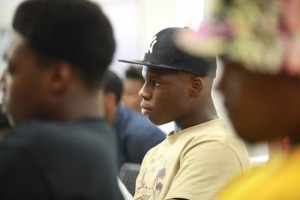 Police brutality is not the only symptom of the disease of criminalization of YMBOC. The implicit bias that clouds the minds of officers sworn to protect can also be present in the minds of teachers and administrators who are tasked with educating. Systemic racism, equal access to education, and the disproportionality of mass incarceration linked together fuel the criminalization of YMBOC inside of the school system, which opens the door to the school to prison pipeline. This pipeline is as interconnected to the struggles created by criminalization as police brutality. The trickle down effects of this type of criminalization are catalysts to inequity in education and contribute to everything from the achievement gap to mass incarceration.

Data shows that YMBOC are pushed out of the classroom and subsequently end up in the criminal justice system more than any other group of students. Zero-tolerance discipline policies have resulted in black students facing disproportionately harsher punishment, making them three times more likely to be suspended or expelled. With 31% of black students representing school-related arrests, black students, particularly YMBOC, are more likely to get caught in the school to prison pipeline through increased contact with the juvenile justice system.

Combating the effects of criminalization calls for narrative change. The “R.O.O.T.S of Sunflower County” project, part of a partnership between the Story for All organization in Oakland, California and the Sunflower County System Change Project aimed at disrupting the pipeline to prison, equips YMBOC with the tools necessary to spark narrative change through simply telling their story. Story for All provides a curriculum that enhances young people’s ability to tell their story and the story of those around them as a means to create systemic change. “R.O.O.T.S,” which stands for “Reclaiming Our Origins through Story,” represents a commitment to establishing a new narrative for YMBOC in Sunflower County by telling the real story of what it means to be themselves in a world that perceives them to be something negative. Their voice leads the charge to free themselves of the criminalization of society and creates outlets for other individuals to do the same

The ailments in society that are fostered by the idea of “just another black male,” a daunting reality in the mind of a young black man, represent the need for a new narrative. A narrative that exists free of the presumption of criminality. By creating this new narrative, we allow the context for real sustainable and systemic change to happen.