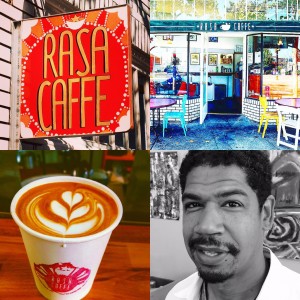 I walk to Rasa Caffe on a cloudy day, look around the small and cozy store as I wait to meet with Rasa Mott, the owner. I spot The Griots of Oakland on the table looking well read. Brightly colored Emory Douglas Black Panther & revolutionary prints line the simple white walls, and a handful of customers sit scattered around, engaged in conversation. The energy is tranquil, but alive. We walk outside and into an indoor courtyard area next door; we sit down for over an hour to talk. Rasa is direct, honest, and thoughtful. In our conversation, he thinks out loud about the meaning of community, local media sources, his evolving perception of the city and of himself, and youth growing up in Oakland today.

The Griots of Oakland is a special book – so many stories, points of view, and insights contained in its pages. It does not present a simple and direct way of understanding Oakland, but takes the reader through all of the complexities of the lives of African American boys and young men who grow up and live here. The stories challenge one another, speak to one another, and build upon each other like layers.  As Rasa observes, “It’s a simple way that they put things, but there’s a lot more going on.”

Speaking with Rasa about growing up in Oakland, it is clear that he also has a complex relationship with the city. He knows the city well, living in North Oakland, East Oakland, and by Lake Merritt at different points in his childhood. Rasa doesn’t see Oakland (“Oakland is the next Oakland”) as the next Brooklyn – to him, it is more akin to cities such as Detroit, Baltimore, and Philadelphia. When he was growing up he only wanted to leave, not seeing opportunity for himself in the industrial neighborhoods of his home city, a sentiment also reflected in some of the answers in the book. Rasa remembers: “The lack of city funds, insufficient health care, poor public transportation, and the distinct border between the haves and have nots. [I was thinking,] what is going on here? Who wants to be around that?”

Rasa began traveling around the world at age twelve, spending extended periods in India, Thailand, and later settling in New York City, where he lived for many years. There he attended culinary school before returning to the Bay Area. Almost two years ago, Rasa Caffe opened, a small shop near the Ashby BART station that serves quality tea, chai, and original house made coffee drinks loaded with fragrant spices. Rasa reflects on the environment of Oakland with new eyes – as both an outsider and an insider simultaneously: “I see that in this kind of urban setting, you have to know what is important, and cherish it, and it becomes more valuable then.” These values include community, friendship, family, and pride in who you are.

Rasa describes the Griots book as “an action point as Oakland changes…[it describes] what Oakland was, is, and will be.” As businesses come into the city, and bring new residents, Rasa wonders if newcomers are aware of the community that they are entering. The Griots book “shows a part of Oakland that people are hesitant to know about, or really don’t care about, because that’s not why they’re here, they’re here to work and build their own dreams.” This book is important because, in his words, “it is a marker that says, ‘We are here.’”

He explained that despite certain generational differences, for example Tupac being replaced by Wiz Khalifa as a popular role model, there are similar models today that correspond with the models of Rasa’s childhood. The young people in Griots are “allowing themselves to be vulnerable, and give their honest answers, which was very impressive to me,” Rasa says, “It was nice to see and read their pure experience. I’m not sure I could have done the same at their age.”

Reactions about the book from cafe visitors were similar. Rasa shares, “No matter what class, race, or creed they were, people were amazed, they thought it was interesting.”

Rasa returned to Oakland from Southeast Asia a couple of years ago, at first working at a popular local restaurant. After leaving that job, a space opened up in South Berkeley, and the moment felt right to dive into this new endeavor. The neighborhood is historically significant. Revolutionary groups, including the Black Panther Party, would come together there, as the nearby university community provided gathering spaces for activists and people of all colors. The Lorin District, as it is now known, was also known for offering Black Panther Party community programs, such as The People’s Free Health Clinic on Adeline Street and free food and clothing programs in South Berkeley.

Rasa Caffe (the name Rasa stemming from Sanskrit meaning: essence, flavor) was primarily funded by a Kickstarter campaign and donations. Rasa is constantly recognizing the influences and support that helped to open and sustain the business. This includes friends who encouraged the project, donors who provided the means to open it, and the community around him.

“We try to focus on what we’re doing for people who come see us and enjoy what we’re creating. It’s bigger than me,” Rasa says, “Especially with business, ego can totally get involved. Then what happens is that the creativity-and what we’re doing-suffers. That’s not what it’s about. This is a culinary experience for us.” Even as the cafe draws influence internationally, it is equally a result of Rasa’s upbringing in Oakland, and returning has truly been like coming back home.

The next steps for the café are more growth and stocking more books! The team is taking the time to be in the moment, and move forward in a conscious and meaningful way. “We would like for everything to be in house and high quality, very consistent, and creative,” Rasa says, “[We are going for] that old school refinement, where it’s just timeless, you don’t feel like it goes out of style.”

Rasa wants more people to read The Griots Of Oakland. It has affected how he views himself and the project of Rasa Caffe: “That book helped me realize that I grew up here, I’m black, I have a project that I’m heading up, and there are probably not a lot of people who look like me who have businesses like this. As diverse as Oakland has become, these young men have a big future here. They are significant roots of the oak tree!”

Jyoti Arvey is a writer based in Oakland. She received her BA in Slavic Studies from Connecticut College, where she completed her undergraduate thesis, Gender in the Everyday Life of the Russian Home, which won the Oakes and Louise Ames Prize for best thesis. Jyoti taught English for a year in Novosibirsk, Russia as a Fulbright scholar. Outside of her writing practice, she enjoys taking photographs, practicing capoeira, and cooking with friends. More posts by this author
Tweet